The number of applications for international protection and asylum in Ireland have dropped significantly according to figures released by the Department of Justice & Equality.

In January and February of this year, 552 migrants claimed international protection in the Republic of Ireland, which is down 27% on the first two months of the previous year, signifying a reversal in the trend of increasing numbers year-on-year since 2015.

Justice sources said that they hoped these new figures would be sustained, leading to decreased pressure on the direct provision system. Conditions in direct provisions have long been criticised by human rights campaigners in Ireland, with overcrowding being one of the chief concerns.

The Garda, along with other sources, noted that the drop in numbers at the beginning of the year did not coincide with the worldwide outbreak of coronavirus.

In November of 2019, Taoiseach Leo Varadker said many Albanians and Georgians were travelling to Ireland with false travel documents, looking to enter the Republic. Minister for Justice Charlie Flanagan said some new arrivals at Dublin Airport were destroying false documents before presenting themselves at immigration checks.

Sources said that the decrease in numbers was due to a decrease of large numbers of people seeking international protection from Albania and Georgia.

Before these comments, immigration officials at Dublin airport had taken the initiative through conducting immigration checks on the runway tarmac. When disembarking passengers were found without the proper travel documents, they were refused entry.

Airlines were also under the obligation to fly people without proper travel documents back out of Dublin Airport. The Garda said that these implementations had resulted in airlines checking passengers more closely when they boarded flights for Dublin. There have also been increased investigations into people aiding people smuggling. 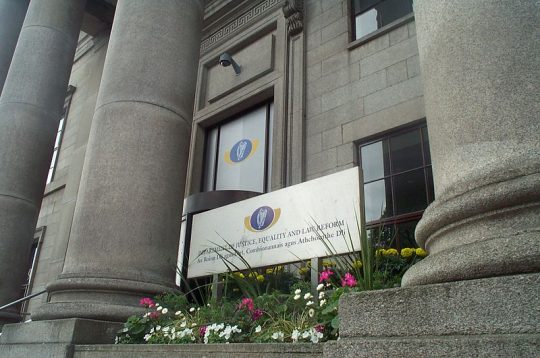 The Department of Justice & Equality have been working to reduce those travelling to the Republic on false documents [Image: Wikipedia]

“This is one of the most fundamental rights set out in the UN Convention Relating to the Status of Refugees, as well as Irish and European Law”.

The Immigrant Council of Ireland, however, had a different view on the whole situation. They said that Irish authorities could not refuse entry into the Republic for anyone who wanted to apply for international protection.

Colin Lenihan, who is the Immigrant council’s information and support service co-ordinator, said that: “This is one of the most fundamental rights set out in the UN Convention Relating to the Status of Refugees, as well as Irish and European Law”.

In response, Garda sources pointed out that Albanian and Georgian applications for international protection were still being made, albeit in a much smaller number. They emphasised that this was proof that no nationality had been singled out and refused permission to apply.

Who Qualifies for International Protection?

The need for international protection arises when a person is outside their own country and are unable to return home because they would be at risk there, and this country is unwilling to or unable to protect the person.