As the Coronavirus pandemic continues to heighten fears and anxieties surrounding public health, business and the economy, those with both temporary and long-term immigration status in Ireland face an additional challenge.

With Europe now in an increasingly precarious situation as COVID-19 cases soar, the topics of both travel and immigration have become enshrouded in ambiguity and uncertainty.

However, despite this, IAS’ team of highly qualified immigration lawyers in Ireland are here to help, offering comprehensive, up-to-date legal advice and guidance via both Skype/video call and telephone. 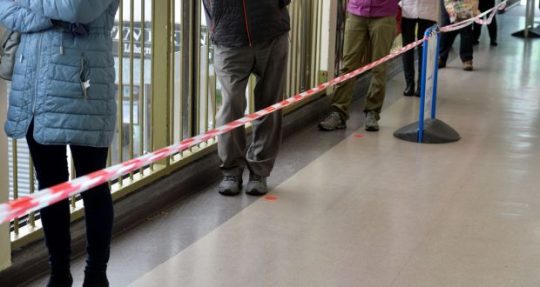 Travel bans have been implemented across Ireland, while immigration permission is automatically extended. [Image: Irish Times]

With cases of Coronavirus now confirmed in the Republic of Ireland, the Irish government has issued guidance regarding travel in an attempt to restrict the spread of the virus.

So far, the Irish government has advised against international travel unless absolutely essential, yet this does not apply to those who wish to travel from Northern Ireland to Ireland, or intra-UK travel. However, despite this, it is crucial to note that travel between the UK and Ireland is subject to change.

These are troubling times for all, however IAS’ team of highly qualified, dedicated immigration lawyers in Ireland are here to help

My immigration permission to reside in Ireland is about to expire, what can I do?

Thankfully, INIS (Irish Naturalisation and Immigration Service) recently announced that those who hold immigration permission or international protection permission in Ireland which is due to expire between 20th March 2020 and 20th May 2020 will automatically have their permission extended for two months by the Minister for Justice and Equality, Charles Flanagan.

This provides huge relief for those who were set to renew or extend their immigration permission within the next couple of months; Mr Flanagan evidently recognises the need to protect migrants and asylum seekers within the State during this time, as many would potentially become ‘unlawful’ if they remained in Ireland under expired permission. By extending all permits, this allows migrants to remain in Ireland with viable permission for at least a further two months.

This is, of course, subject to change and may in fact be further extended depending on how the Coronavirus pandemic progresses over the coming weeks.

I am an Irish citizen with family in the UK, can I travel to the UK at this time?

The most recent travel advice from the Irish government urges all Irish citizens to restrict travel unless absolutely necessary until at least the 29th March, including to Britain. However, those who feel it is necessary to travel to Britain are advised to obtain a European Health Insurance Card (EHIC) prior to travelling. This is in addition to obtaining travel insurance which covers all overseas medical costs, such as medical repatriation/evacuation, repatriation of remains and legal costs.

Can I still apply for an Irish visa?

On 20th March 2020, the Minister for Justice and Equality announced that Ireland will no longer be accepting new visa applications. This is to protect both those within Ireland and beyond; there are now 1,125 confirmed cases of COVID-19 in the State.

The Irish Health Authorities now require anyone who enters Ireland, apart from those arriving from Northern Ireland, to restrict their movements and to self-isolate on arrival for 14 days.

These are troubling times for all, however IAS’ team of highly qualified, dedicated immigration lawyers in Ireland are here to help. If you require any guidance regarding your immigration status and permission, and any future extensions/renewals you may require, we are able to provide detailed, tailored legal advice.