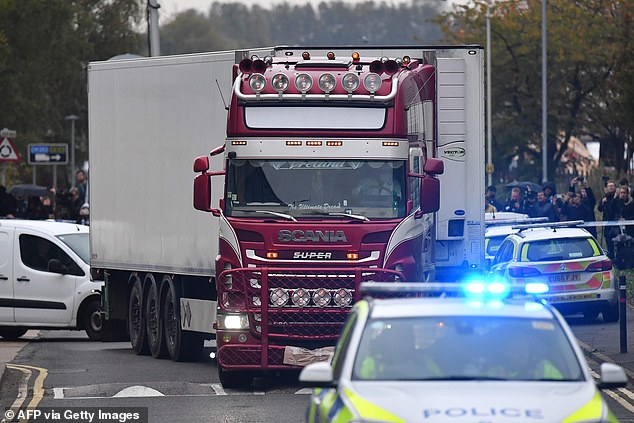 The 40-year old man, Ronan Hughes, first made headlines when 39 Vietnamese migrants were sadly found dead in the back of a lorry container while passing through the UK. Their bodies were discovered last year in Essex.

The case has drawn national as well as international interest. The tragic circumstances under which the 39 died have not long been forgotten. The driver, Maurice Robinson, allegedly opened the doors of the truck and discovered the scene. However, Robinson is discovered to have rung Hughes first before the emergency services.

The court was told that the man behind the operation, Mr Hughes, is responsible for having “organised, paid for the travel and controlled the drivers who collected the migrants.”

After his arrest on April 20, Mr Hughes now faces 39 counts of manslaughter and one count of conspiracy to assist unlawful immigration.

The court was told that the man behind the operation, Mr Hughes, is responsible for having “organised, paid for the travel and controlled the drivers who collected the migrants.”

The Criminal Assets Bureau has since seized Hughes’ possessions that have said to be bought with the money he made through his grandmaster criminal operations, including a 2019 BMW X5 valued up to €108,000. A further €200,000 has been frozen across his and his family’s 33 bank accounts.

The court was told Hughes has previous road trafficking and smuggling convictions, including one where he spent 30 months behind bars for smuggling five million cigarettes.

Mr Justice Paul Burns will decide whether or not Hughes’ haulage firm will be granted bail. However, Detective Sergeant Jim Kirwan of the Garda Extradition Unit claims that the gardai are strongly against granting bail due to the gravity of the case.

In both UK and Irish immigration law, foreign nationals require a visa or entry permission in order to enter legally. This can range from a Tourist Visa, Employment Permit to permission to Join Family Members in Ireland.

Although people can clandestinely cross borders in order to claim asylum, many sadly become victim to unscrupulous traffickers who attempt to make a profit out of their precarious situation. Human traffickers and smugglers sneak migrants into countries in however which way they can, with little care shown to protecting human life.

Mr Hughes is said to have conspired with others to facilitate the illegal entry of people from as far back as 1 May 2018. However, in this case, 39 Vietnamese men and women including teenagers, tragically suffocated to death in the back of a haulage truck between October 22 and 24 last year.

Sergeant Kirwan said that Mr Hughes had falsely declared at the ferry port that the truck carrying the migrants was importing biscuits.

Human traffickers and smugglers sneak migrants into countries in however which way they can, with little care shown to protecting human life.

The ferry had entered international waters at 19:43. Yet phone records from the deceased at the time to their loved ones show that they were struggling to breathe due to “insufficient air”. It is estimated they all died between 20 pm and 22 pm.

As a result, both Mr Hughes who is responsible for the operation and his co-conspirators face multiple charges, encompassing a life sentence if convicted. It is alleged that Hughes had paid the driver, Mr Robinson, €25,000.

Sergeant Kirwan said that Mr Hughes has a network of connections all across Europe. His haulage firm is located in Bulgaria.

Kirwan continued: “Given the nature of his work, he has great familiarity with various ports throughout Europe and how to exit and enter them and he has the whereabouts to flee the jurisdiction at the appropriate time.”

Hughes’ conspiracy operation runs deep. On the day of the untimely deaths of 39 migrants, Hughes is said to have removed vehicles from his business.

The authorities strongly believe that Hughes, if granted bail, could flee and avoid presenting himself to the UK authorities. However, Hughes claims to have cooperated from the start. While giving evidence via video-link due to the Coronavirus pandemic, Hughes said that he had told his solicitor to contact the Garda to let the Irish authorities know where he was living that he was ready to cooperate throughout the case.

Hughes claims to look after his elderly father and so has agreed to suspend his passport, adhere to a curfew and sign in at Monaghan garda station on a daily basis if he is to be awarded bail.

On 8 April, Maurice Robinson, 25, of Northern Ireland, pleaded guilty to 39 counts of manslaughter at the Old Bailey in London.

Mr Robinson will be sentenced at a later date.