The Immigrant Council of Ireland (ICI), an independent non-governmental organisation which promotes the rights of migrants, has called on the Irish government to work on completely overhauling the Irish immigration system.

The council says that the Covid-19 pandemic has highlighted the ineffectiveness and ineptitude of Ireland’s immigration system.

The CEO of the council, Brian Killoran, said that the system is filled with complications, inconsistencies and needless delays.

Killoran went on to argue that the new head of the Department of Justice, Helen McEntee, has the chance to completely revamp the immigration system.

“Time and again we hear from clients who face inconsistencies, discrepancies and delays in their application. Problems then come when they legitimately apply for visa renewals or even citizenship applications and get penalised for delays which weren’t their fault.” 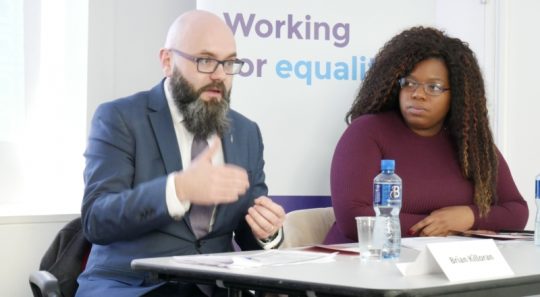 Brian Killoran said this is a perfect time to develop an efficient immigration system. [Image: Spunout]

In one instance, a Pakistani man, Ali, who was returning home from Poland said he was forced to show his history of messages with his wife to prove that he was in a relationship with her.

A case study which was supplied by the ICI explained that Ali, who has been a legal resident in Ireland for ten years, was interviewed by border officials, who questioned his immigration permissions and right to be in the country for one hour.

Ali had spent a week in Gdansk with his Polish wife and her family. He travelled back to Ireland alone to return to work, whilst his wife stayed in Poland to spend more time with her family.

“Do I always have to show me and my wife’s conversation when I am coming to Ireland? Do I have to prove my relationship all the time? For what am I being penalised? I don’t know. I felt as if I have done a crime that I am living here for 10 years, paying tax all that time.”

During the Covid-19 pandemic, the Irish government has already changed certain elements of the immigration system.

Two weeks ago, it was announced that an online system which was introduced last year for non-EEA nationals to renew their immigration status in Ireland will be implemented indefinitely in Dublin.

The Department of Justice stated that the new online system will make the process of renewals more straight forward for “10,000s of people every year”.

Killoran believes that much more needs to be done in reforming the Irish immigration system. He emphasised that there is a real and urgent opportunity for the new government to address the issues with the immigration system head-on.

“With some responsibilities being moved from the Department of Justice, including Direct Provision, this is the perfect time for it to prioritise the development of an efficient immigration system which better meets the needs of both those using it and those providing the administration.”

Do You Need Immigration Assistance?

If you need any assistance with your immigration permission in Ireland, the Immigration Advice Service is here to help.

With an unrivalled level of experience, our immigration specialists are here to offer assistance in all areas of immigration.