President-elect Joe Biden has said that he does not want a guarded border between Ireland and the UK.

The UK government has stressed that they are willing to leave the European Union without a deal. If they were to do so, this would complicate the situation at the border between Northern Ireland and the Republic of Ireland.

On Tuesday, Biden told journalists in Wilmington that the border must remain open. Answering a question from a reporter on what he would say to Brexit negotiators, Mr Biden said: “we do not want a guarded border”.

Mr Biden has been vocal about his Irish heritage throughout his political career. The president-elect warned months ago that as the Democratic candidate for the presidency, he said that the UK must honour the 1998 agreement as it withdraws from the bloc or there can be no separate trade deal between the United States and the United Kingdom.

It is understood that the UK Prime Minister will need to work hard to foster the ‘special relationship’ between America and the UK.

Hope of a Trade Deal

The 1998 Good Friday peace deal, which ended Northern Ireland’s 30 years of sectarian violence created institutions for cross-border cooperation on the island of Ireland.

In September, Boris Johnson put forward legislation which would break the Northern Ireland protocol of the Brexit withdrawal treaty which seeks to avoid a physical customs border between the British province and Ireland.

Ireland’s Prime Minister, Micheal Martin said on Monday that he hoped the outline of a Brexit-free trade deal would emerge towards the end of the week. This is in spite of what EU negotiators called ‘fundamental divergences’ at talks.

Whether you are looking to apply for a visa in Ireland, or you wish to remain your immigration permission or apply for settlement, the IAS is here for you. 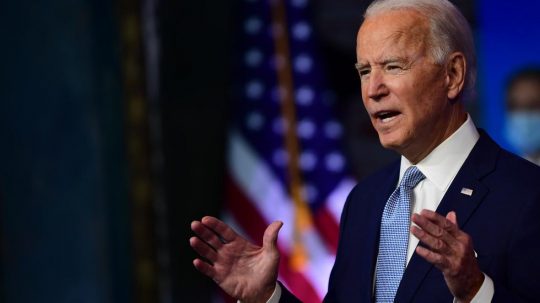 Joe Biden has been vocal about the need for the Good Friday agreement to not be jeopardised. [Image credit: Mark Makela/Getty Images]